··· Chatra ↑ All books
§§ Table of Contents − − − − − − − − −
Building
a Customer
Service Team
1. Introduction 2. Hiring Tips 3. Best websites for finding new talent 4. Interviewing Candidates 5. What about hiring in different time zones? 6. How much should you pay? 7. Employee Onboarding Tips 8. Creating a perfect working environment for your support team 9. How to prevent burnout 10. Empowering your employees 11. Tools and resources 12. Conclusion

O nboarding is one of the most important and tenuous times in a new employee’s lifetime with the company. It’s your company’s opportunity to show your new employees what you’re all about, and the new employee’s time to see if it really is a good fit. In fact, studies show that roughly 33 percent of employees make the decision to stay on board with a company or jump ship within their first 30 days of employment. 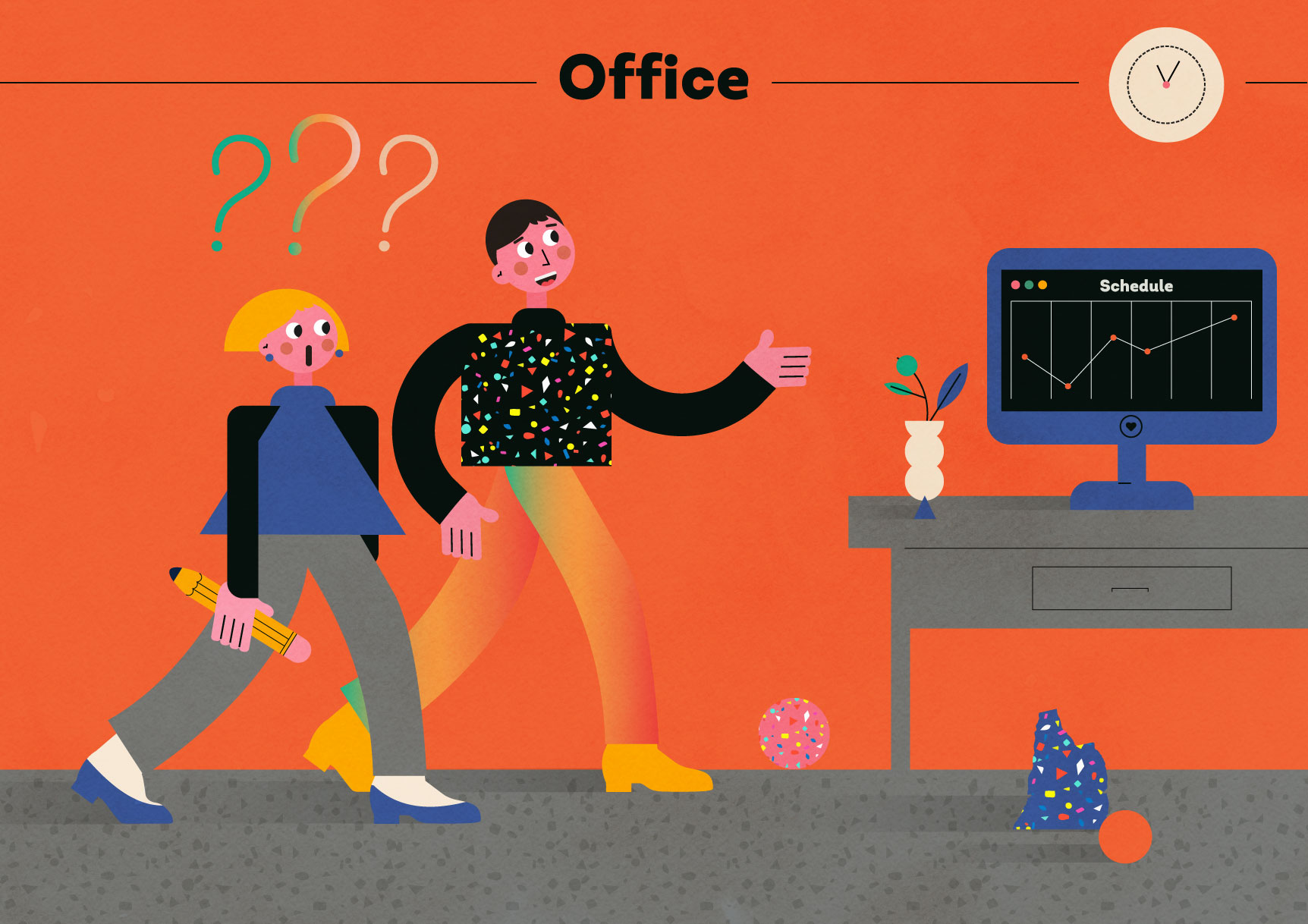 So, those 30 days are integral to a successful relationship. What are some ways that you, as the company, can ensure that it all goes according to plan?

Reach out before the first day

Campaign Monitor, Help Scout and other companies have an email campaign that reaches out to new employees before they even get started. It includes information about things like when the new employee can expect their computer to arrive (both companies are remote), suggestions for reading that might help them during their first week, and even tidbits about company culture, such as what to wear and when lunch is served.

Not only does it give the employee key information to help them feel more comfortable on their first day, it also shows them that you are interested and excited about them coming onboard still.

Create all accounts and get all desks and equipment set up

There is no worse experience than getting to an office and discovering that none of the things that you need to do your job are available. It almost feels like you were an afterthought, or forgotten about completely. Don’t make your employees feel that way on their first day! Have all of their accounts as well as their desks and technology set up and ready for them before their first day. That way, when they do come in, they can get right into their training and meeting the team, and not have to figure out where the stuff they need actually is.

The first day should be all about meeting people, learning the culture, and high-level, inspirational aspects of your company. While getting down to the nitty-gritty of the product is nice, you want to give them an exciting and enthusiasm-inducing diving board to jump off of, first. So, do all kinds of team lunches, meetings with different heads of departments, and maybe even team-building exercises for the group of new onboardees so that new employees have built-in buddies in other departments. After the first day you can get into true onboarding curriculum, but keep the first-day fun and light to get them excited.

Everything that is on your onboarding schedule should be there for a reason. Similarly: it should be pretty closely spaced together. Brandon Hall Group did a study that suggested that by keeping all the scheduling tight, and the meetings close together, companies can improve new hire retention by 82 percent and productivity by over 70 percent. If you give a lot of time between meetings, or you spread out onboarding more than it needs to be, you give new onboardees the opportunity to lose focus.

After all, if they’ve only had four trainings, and then they have a whole half day to themselves, they aren’t going to know what to do with it — and you shouldn’t expect them to! Make sure you have everything scheduled out ahead of time so that they can look and know what to expect, and keep everything close together to avoid their minds wandering or getting bored.

Get the whole company involved

The whole company should be involved in onboarding. What that means is that every head of every department should be responsible for a training talking about that department. This helps to get new employees familiarized with faces that they’ll be seeing around the office or on video (and vice versa) but also gives the new team members a sense of cross-functionality. For example, while salespeople might not immediately need to know the head of engineering, it would probably be good for them to at least know who to go to if they have an issue that they need to talk about in the future.

For support, this is even more important: new support team members should get to know and cultivate relationships with all of the different departments, as it’s very likely that they’ll have to work with them moving forward. So, getting the whole company involved in onboarding them is especially important and valuable.

Culture is often something that takes a backseat in onboarding, as tangible things like product functionality, or in-office protocols are taught. However, according to Glassdoor even just a one-star increase in culture and values ratings on Glassdoor raises the odds that employees will stay at their existing company when moving into their next role by five percent. That’s a pretty impressive statistic, so get started on it early. Discuss culture and values frequently, and ensure that you link them to something actually within the culture, or solid examples so they don’t just go in one ear and out the other. If new employees have something to anchor the intangible on, it can go a long way towards helping them align with it.

If you are bringing new employees in in groups, it’s a good practice to get into the habit of encouraging them to offer constructive insights amongst themselves, to themselves, and to the people instructing their training or meetings. This gets them into the habit of providing feedback, and also shows them that it is safe and encouraged. Lead by example and offer constructive insights when they are watching (if it makes sense to), and reiterate how important it is when in new training or sessions.

Don’t expect them to hit the ground running

While it’s always nice when you get an employee who gets started immediately and is automatically speeding along doing exactly what they are supposed to do, it’s pretty uncommon. It’s unfair for you to expect that a majority of employees would be able to take off at the same speed as someone who has been with the company for even just three months.

Most people need time to ramp up and familiarize themselves with the tools and functionality of your product. They also have to learn the tools that you use internally to do things like answer customer inquiries, respond on social media, review code and a number of other things. Give the time to learn that before you expect too much from them within their actual role.

As I wrote in this post for Help Scout, 30/60/90 plans are meetings that you set up with the employee and their manager at the 30-day mark, 60-day mark, and 90-day mark. Each step communicates things like what they should be accomplishing, benchmarks, and new job aspects that they are expected to take on each step of the way. 30/60/90 meetings are valuable for employees because it gives them a map of where they are supposed to go, and also lets them self-assess as they go through onboarding.

It also gives the manager a platform from which to speak about performance, as it’s already been communicated early on in the employee’s time with the company.

Assign a training buddy or mentor

When an employee starts at a new company and doesn’t know anybody, it can be really intimidating and scary. They might not even know who to turn to if something is going wrong, or something inappropriate has happened to or around them. So, if you assign a training buddy or mentor to them, they’ll always have someone within the company that they can talk to and ask questions. Depending on how big your company is, it could be good to have their buddy be on another team for more cross-functional team-building. There is an additional benefit, though, to have their buddy be someone that works on their team with them as it gives them a person to bounce ideas and questions off of, specifically when they get to work in their own role.

Much like the benefit of 30/60/90 reviews, having pre-scheduled, regular check-ins between manager and employee is a great way to make sure that there’s a thumb on the pulse of the employee’s performance. It also gives the employee a regular time to ask questions, share concerns, or get a bit more context as they go through the onboarding process.

Even if you feel like a daily check-in is too much, it might be good to start with that cadence as it sets the tone for the relationship between the manager and the employee. You can always shift it to be less frequent as needed, but at least starting there is a good jumping off point.

← Previous
6.
How much
should you pay?

Next Chapter →
8.
Creating a perfect
working environment
for your support team