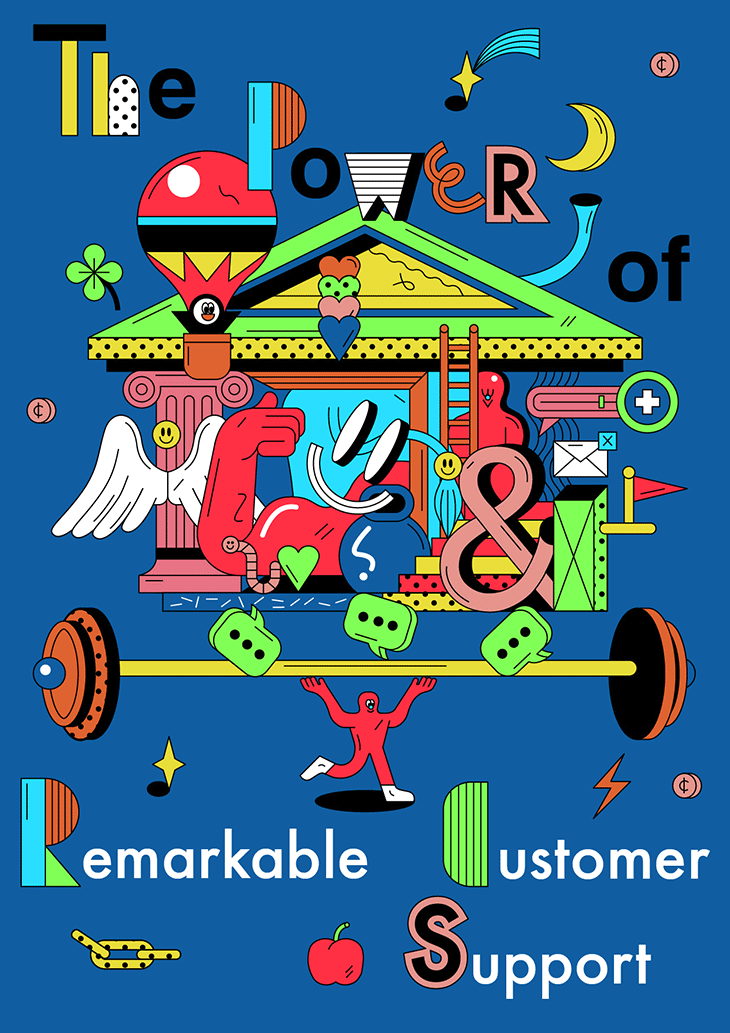 The power
of Remarkable
Customer
Support

The year was 2009. Digital and social technologies were rocking the boat, putting even established businesses on a new learning curve. But one important lesson would go unnoticed until it played out in real time.

It began with musician Dave Carroll and his fellow band members sitting on a United Airlines plane, waiting for takeoff. They heard a fellow passenger comment that guitars were being thrown around on the tarmac below, and they panicked. It wasn’t a huge leap to assume the guitars were theirs.

Carroll immediately alerted some United employees, but his concerns were ignored. He could only hope their guitars had survived unscathed — a hope that was dashed when he collected his Taylor guitar at the end of the flight and realized its neck was broken. It would take $3,500 to repair it.

Customer support was his first attempt to address the problem. Nothing.

He then turned to other channels, talking to United representatives at every point of contact with one message:

“You broke it. You should fix it. You’re liable. Just admit

To no avail. It took a video titled “United Breaks Guitars,” published on YouTube and quickly accumulating 150,000 views, to get United’s attention. Today, that video remains one of the most important videos in Google’s history. And the reason is simple.

“United Breaks Guitars” marks the moment in history when businesses saw the critical danger of ignoring customer complaints. Not only could the entire world be alerted to the failure of any size, but the backlash could also ruin them. Stock prices could tumble. Public relations nightmares could continue for years.

Businesses realized that you can be unforgettable for negative as well as positive reasons. And the viral potential of just one customer’s unhappiness makes it critical to ensure every customer touch be positive.

There’s No Such Thing as a Small Mistake

A business is built on the foundation of customer satisfaction. When customers are happy with your products and service, they become loyal fans and provide word-of-mouth advertising. When they’re unhappy, they can become a public relations nightmare, raising churn and reducing profits.

That’s why smart businesses invest fully in customer support, refining their ability to make every customer happy. Their aim? To create an experience that’s unforgettable, that exceeds expectations and reduces stress, creating customers for life.

A study by American Express has found that eight in ten Americans feel businesses are meeting or exceeding their expectations for service. Seven in ten say they’ll go out of their way — and spend more — to do business with a company they know will give them better support.

These numbers have been rising steadily, probably because digital technology makes it easier for businesses to provide the right support at the right time. And consumers have enjoyed the freedom of contacting a company whenever and wherever it makes sense for them — while they’re on the job, doing chores at home, or standing in a line at the grocery store.

The trouble is, customer support isn’t always the priority it should be. At least not until a disparaging video goes viral, as it did for United. In most cases, it’s merely an afterthought, just another item on the checklist of things you do to run a business. But this mindset is a recipe for failure.

Offering remarkable customer service must be a top priority from Day One. It must provide real solutions that serve customers' needs. It must be so impressive that it’s unforgettable. As Daymond John of Shark Tank fame says:

“To over-deliver in service to a customer is by far the most valuable thing to a business. Because there are only two ways to improve the operations of a business: to increase sales or decrease

Daymond John’s Success Formula: 5 Reasons Why Customer Service Is More Important Than Anything Else

What You’ll Learn in This Book

This book fills a gaping hole in business training: how to do customer support right. It’s one thing to know it’s the foundation of success and that it needs to be unforgettable. It’s quite another to know how to deliver it. We aim for this book to be your guide.

We’ll show you how to make your customers feel like a VIP and share seven deadly sins you must avoid. You’ll learn about the challenges you may face, especially as support becomes more text-based and automated, and how to avoid complaints while delivering better support. And we’ll give you a twelve-point checklist to use in every conversation, so you can be sure you’re creating a memorable experience.

Remarkable customer support can transform your business. It can raise to you to the top of your industry, giving you a huge edge against the competition. But it can only do that if you do it right.

Let’s get started, shall we?

Next Chapter →
2.
The Hidden Benefits
of Killer Customer Support