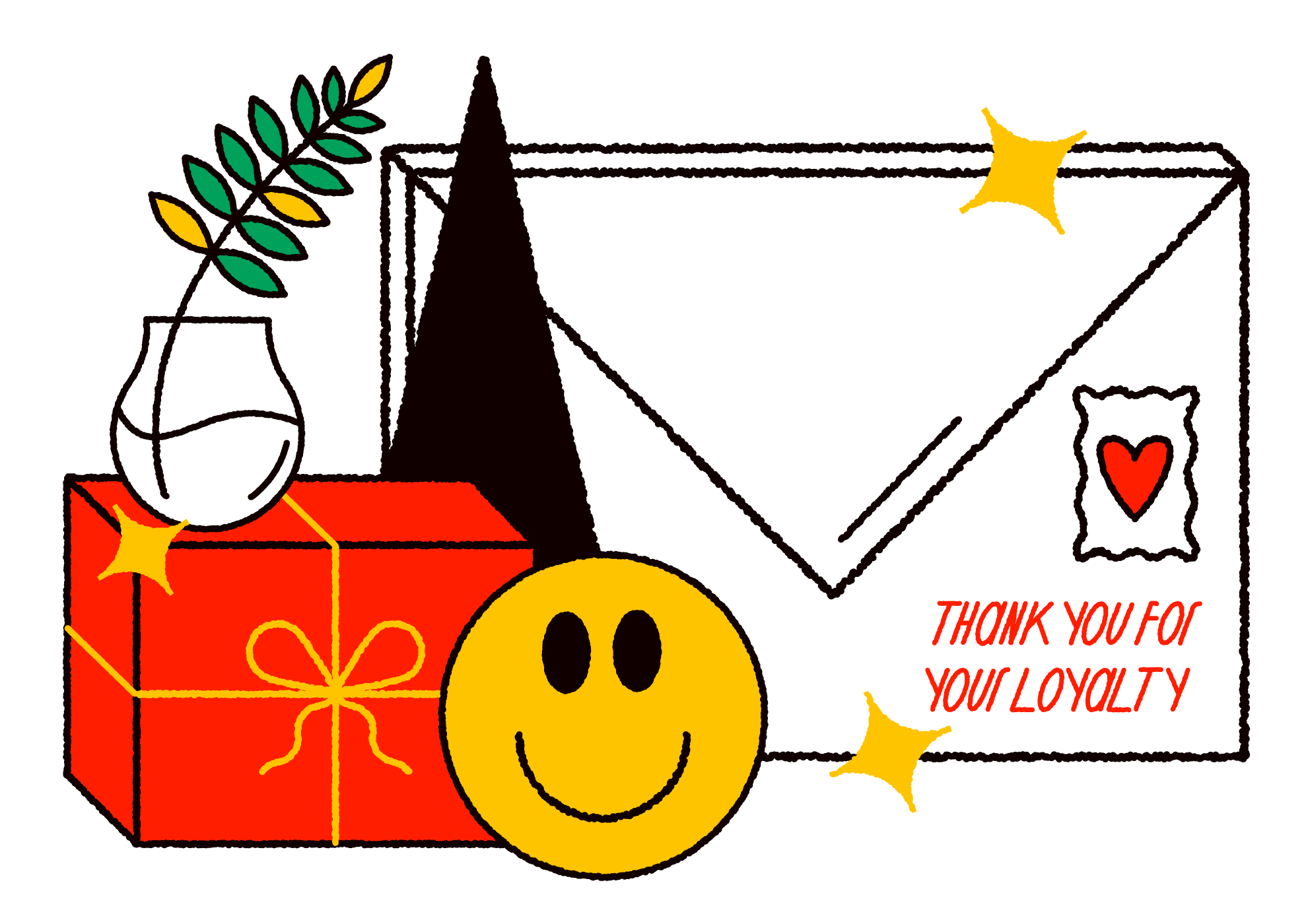 If you’ve shopped anywhere within the last few years, you’ve likely come across or signed up for a customer loyalty program (CLP). Starbucks has their app that automatically gives you points, most grocery stores offer cards to give you better discounts on their products, and even small retail stores offer punch cards that incentivize coming in and buying a certain amount of products in order to receive one free.

CLPs are great ways to generate loyalty with your customers, generate recurring revenue or even get new incoming users through referrals. They’re fairly straightforward to implement and can offer huge returns for your business, so let’s dig a little bit deeper into why and how they work, and how you can make them work for you.

Why do CLPs Work?

According to Groove, there are three main types of loyalty programs based on how they are structured. Each have their own ways of being compelling to the specific type of person it’s created for.

Reward for Number of Purchases

You’ve likely seen something like this at a local sandwich or bagel shop. The idea is this: the customer gets a “point” for each purchase they make. Once they make a certain number of purchases, they get a reward on the next purchase; usually a free product or discount.

Sound familiar? You go to the same bagel shop every day because you have to work on your points, not necessarily because they are good.

In one study at USC, researchers handed out loyalty cards to customers at a local car wash. The cards offered a stamp for every wash purchased.

But there was a twist: half of the cards had spots for eight stamps, with a free car wash offered for collecting all eight. The other half had spots for ten stamps, but two of the spots came pre-stamped. What they found was amazing: the pre-stamped cards resulted in 178% more repeat business than the unstamped ones. Because customers felt that there was already some progress being made on their cards, they were more invested in finishing it.

This structure isn’t just for retail or eCommerce; it can be used in SaaS, too. If your business has a subscription model and pricing and transactions are fixed, then you can use something like this to reward customers for their continued long-term business or referrals, ie. refer 5 friends to your company and get a free month.

Another option for retail and eCommerce businesses is the ability to reward customers for spending a total amount of money, whether it’s in a single purchase or over time. The main advantage of this type of program is that it incentivizes purchase size and purchase frequency, versus a reward-per-transaction model which only encourages individual transactions.

A great example of this would be the airline points system: based on the money that you spend with a specific airline, or by using a specific airline’s credit card, you are able to then recoup your money back, in a way, by booking travel through points.

The third rewards model offers customers instant gratification and rewards, but at a cost. Customers “buy-in” to a loyalty program expecting that they will get their money back in the form of loyalty bonuses.

A classic example of this type of rewards program is Amazon Prime. The customer pays $99 and then gets unlimited two-day shipping and other benefits like free streaming movies for a year.

The power of a paid-upfront rewards program lies in the psychology of maximization: customers spend money on the program, so they want to make sure that they get the maximum value possible from it, which keeps them coming back. In fact, it’s been reported that Amazon Prime members spend twice as much as non-members.

That being said, be careful: this isn’t true loyalty. The customers that pay for paid upfront rewards programs are not loyal to the product because they love it, but instead because they paid for it. So, if something came along that was just as good and less expensive, they would likely take that.

So, after determining which customer loyalty program works best for your particular business model, incentivizing what you want to offer and how you’re going to make it most compelling for your customers is the next step. Help Scout speculates that there are three ways to do this:

This is quite important. When it comes to CLPs, nothing is driving customer engagement except for the end goal and the reward the customer receives by getting there—this is evidenced by things such as Starbucks adding additional specialty “star earning” days on days where they are less busy, or certain products are less popular. For example, maybe they offer double stars for gingerbread at the end of the holiday season—they get rid of product, the customers get double incentivization to spend.

So, when considering what to use, try to pick something that is going to drive your customers and actually make a perceived impact for them, even if the result is actually small for you. Remember that loyalty rewards can vary depending on industry; for example, some SaaS companies offer customers price discounts or an upgraded account (such as additional storage or more features) as the end goal, whereas in-person retail establishments might offer a free small product upon completion. No matter what you do, know that using your own product is going to be the best path here.

While it can be tempting to just pick an action that a lot of people take in your application, and use that as the behavior to drive forward their progress in your CLP, you should be careful what kind of behavior your reward. For example, at a bagel shop, you’d want to reward people with every bagel they purchased, rather than every cup of coffee—even if people bought cups of coffee more frequently.

Don’t try to force product use as part of the incentive—if you were a photo hosting company, for example, you wouldn’t want to use photo uploading as the behavior you rewarded. Instead, you could use something like a new user referral, like Dropbox.

Pitch it as a bonus

Customers won’t want to work for something that they don’t understand as a benefit. No matter what you choose to do for advancement, make sure the reason for the bonus is well-defined and that you explain why it’s so awesome to the people you’re hoping to get buy-in from. If you give them bonus points to start off with, like the car wash in our earlier example that granted two bonus points on their punch card, also give them a reason as to why they are getting the bonus points. For example, you could say that you are giving them an extra few points to get them started because you’re grateful for their new signup.

Once you’ve created the bones of your Customer Loyalty Program, it’s time to start marketing it. This usually means creating the physical materials needed for it or marketing landing pages on your website. You should place your marketing materials, whether digital or physical, where your customers will see them before taking the action your CLP is trying to incentivize. For example, if your loyalty program is built around purchases or the amount of money a customer spends, you should put marketing information about it near your physical cash register or near your checkout page on your website.

Imagine this: a customer is going to check out on your website and then sees a notification that they can receive free shipping on any order over $100. According to ClickFox, more than half of customers would consider increasing the amount of business they do with a company for a loyalty reward, and 46% already have. So, more than half of the people seeing that notification are going to try to boost their order so that it costs $100. That’s a lot of additional revenue from some pretty simple marketing.

The same can be done if you are looking to get new customer referrals as part of your customer loyalty program. In that case, on the account page, you might include a mention of your program, or even create an in-line form that allows them to refer people right then and there. This both does the job of marketing the program and allows them to sign up and use it easily with minimal effort.

Find the place where your customer is already thinking about the thing that they will need to do to earn points in your customer loyalty program, and then place information about it or the option to interact with it there.

Best Practices for your CLP

If you do choose to make a CLP for your business, there are a few best practices that you should follow to make sure that it does what you want it to and becomes part of your customers’ habits, and makes them more loyal to your company. While financially- or reward-driven loyalty can be a bit tricky to manage, it can make things a little easier if you you create a loyalty program with real, perceived value to your customers. That way, it won’t seem so much like trickery as much as the reward that you intend it as.

The first key best practice for a customer loyalty program is to make sure that progress is easy to track and easy to find. In physical stores, this often presents itself as a stamp card or something that someone can carry with them to swipe. These are also valuable because they serve as a reminder of your business every time the person opens their wallet. Virtually, this can be a page like Trello’s ‘Recommend’ page, which gives you a form to recommend people, and also shows how many people you have recommended up to their reward cap of 12. It could also live on the Account page, or wherever the user is expected to manage team members and collaborators, if new referrals are the aim of your CLP.

Similar to the above point, maintain transparency in your CLP. Let the customer know what they’ll receive for their loyalty to your brand, rather than keeping it a secret and sending them a fruit basket when really they want a free month of subscription. While it’s important to show them how far along they are until their new reward, there’s also a deep value in knowing what’s coming rather than having it be a surprise. Plus, it can incentivize them to even more deeply invest themselves in working for the reward if they know what it is and are interested in it.

The second best practice is making sure that your rewards are relevant and practical. Luckily for you, you have a bounty of things that the customer is already interested in that you can give away for little cost: your product, or discounts on your product. While it can be tempting to giveaway shirts, or gift cards, an MIT study on customer loyalty uncovered that basically the least useful or perceived valuable rewards for customer loyalty are free gifts. They are nice to receive but, because of their short-term benefit and lack of attachment to the brand, they can actually serve to devalue what you are trying to do. So, rather than sending out that box of cookies, offer a discount or free product from your store, and you’ll likely have much more uptake in your CLP as well as recurring usage of your product.

Finally, make sure that the value of what you are offering as a reward is financially maintainable, especially in relation to what you are asking your customer to contribute. For example, if you are asking for someone to recommend your product to 10 of their friends, you should calculate what the value of that is and then ensure that whatever you are offering is not worth more than that. This is especially true if someone is particularly successful with your reward program—you don’t want them gaming your system.